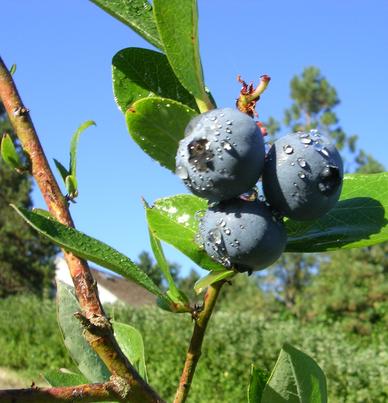 We started our family business of growing organic blueberries

in 1983. We were raised in Montana where our mother’s made

everything from scratch and used vegetables from our

gardens. As children growing up, one of our chores was to pull

weeds which, was important to our families instead of using

the leaves and in the fruit of the plants. When Gary finished

his tour of duty in the United States Navy, we moved to

Oregon because of their views on healthy living. We later

found a piece of land in Sherwood, Oregon with acreage that

was covered with large tree stumps. We wanted to plant a crop

designer and having two toddlers. In the fall, Lynn was

teaching a unit on Native Americans and read an article about

how they included wild blueberries in their diets. This would

be a perfect plant since they produced in July when Lynn wasn’t teaching and was a popular fruit of Oregonians. So we sold Lynn’s red BMW and purchased and planted 3,500 blueberry plants, which included Early Blues, Blue Ray, Blue Crop and Ivanhoe. Planting was an experience with working all-day and coming home for dinner and then going to the fields until 9:00pm. We were creative and had a string with knots every three feet that, signaled Lynn, as she drove the tractor to stop at every knot while Gary positioned the auger. From our background of growing crops in Montana, they did not want to use chemicals because these pesticides were so harmful to our health. So it was important to raise our children on organic foods and not use pesticides on our blueberry plants. We like watching our children eat blueberries right off the plants and not have to worry about

pesticides and herbicides. Even washed

sprayed blueberries can still contain these

toxic chemicals. Besides the importance of

being organic, part of what makes us

different from other farms is that we have

complete quality control of every stage of

processing. We are the grower, picker, packer,

shipper and from scratch pie and candy

Department of Agriculture as an organic

September to local grocery stores with only

four employees.  Our goal was to expand our business, so we designed and built a three story processing facility. Lynn started baking using organic blueberries with her mother’s recipes. One day she had an idea of canning the organic blueberries, which would create a tasty sauce from the juices. We found a cannery near the airport, where we could use their equipment and can the blueberries in water. This led to another phase, creating gift boxes, which Gary designed and silkscreened his artwork on these boxes. Each box contained cans of organic blueberries, blueberry jams and

syrups with Bob’s Red Mill’s oat bran muffin and buttermilk pancake mix. These boxes were advertised in Sunset magazine. We then began experimenting by drying our organic blueberries in a small dryer, which only dried a few pounds per week. In1989 visitors from Japan on tour with the Oregon Department of Agriculture came to visit our farm. They were interested in our organic dried blueberries because we didn’t add any preservatives, oils, sugars or chemical additives. Our goal then was to find a larger dryer. We found a commercial dryer in the Capital Press Newspaper that was on sale but not assembled.
Gary and our son drove eight hours to southern Oregon and brought back sections of the metal dryer. It was then necessary to add another room on our processing building for this 98 foot dryer. After constructing the floor, our family put in many hours assembling this dryer which, only included instructions in French and Spanish but there was a helpful holiday photo. After the dryer was assembled, the walls were built around it completing this room for us to begin dehydrating our organic blueberries. We take pride in drying at a low temperature to retain all of the valuable nutrients. This is different from how other processers dry their fruit. When the fruit is dried at a high temperature, the healthy enzymes are destroyed. Early in 2000, the US Department of Agriculture completed a standardized certification process and Oregon Tilth began certifying farms and we been certified with them every since. Our products are also, certified by the North American Kosher Supervision. One year during harvest, Lynn made from scratch a blueberry pie for the workers from Gary’s Norwegian grandmother’s recipe. The workers insisted that we start sharing our organic gourmet pies with the public. Hawks View Cellars near the farm planned an event and asked if we could create small blueberry pies.  From this request, we developed four different varieties of blueberry tarts. Our relationship with the winery grew and they began selling our 9” frozen organic blueberry pies to patrons. For another event, the winery asked if we could mix blueberries and chocolate. Some companies soak their dried blueberries in sugar water and Lynn thought we could try brandy as an alternative.  So our kitchen staff started making Kosher Blueberry Clusters with the infused dried organic blueberries coated with dark chocolate. Then Stoller Vineyards asked if we could infuse their Pinot Noir wine in the Blueberry Clusters. We are continually working on new creations and striving to do a berry good job in producing nutritious and delicious products from our farm to your table.